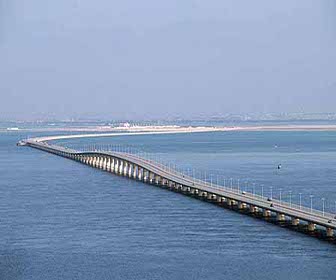 Work on King Fahad Causeway in Bahrain to begin by 2011

Preparations at the site of Bahrain's King Fahad Causeway that will connect Bahrain to Saudi Arabia is progressing as per schedule with work expected to begin in 2011. Upon completion, the Causeway would handle 100 million passengers a year as per a long-term plan that includes creating two artificial islands - each spread over 400,000 square meters. One of the artificial islands will be located on Bahrain's side of the causeway and the other at the Saudi end. Construction at the site is expected to begin by 2011. Saudi customs manager and King Fahad Causeway director-general, Saleh Al Khileiwi reportedly stated that tenders will soon be issued for this major project. He went on to add that each of the islands will include 48 lanes for incoming and outgoing traffic. The expansion will accommodate small-sized vehicles, with plans for an additional 20 lanes and four lanes for buses on either side. Besides waiting yards that will accommodate 400 trucks on either side of the causeway, eight lanes on either side will be allocated for trucks and a customs cargo yard will be built to house 400 trucks at a time. As of now, a consulting firm has been assigned to prepare a comprehensive study to develop the causeway in the next 20 years.