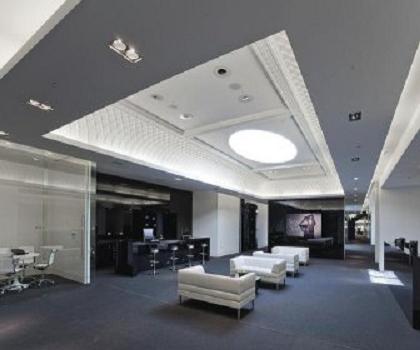 Interior design practice Studiofibre has added a second office space for online fashion retailer Net-A-Porter to its portfolio, repeating favourite aspects of its design for the firm’s old office and adding new dashes of creativity. If you haven’t quite got the hang of buying your clothes online then you soon could be in the minority. With no crowds, no queues and, best of all, no bags to carry home, internet shopping has been the retail phenomenon of the past decade, and companies like Net-A-Porter are reaping the rewards. Having outgrown its dinky office in London’s Whiteleys shopping centre, Net-A Porter, which entrepreneur Natalie Massenet founded 10 years ago, needed new and bigger accommodation. A cavernous, aircraft hangar-like space at the top of the Westfield shopping centre was the answer, and office design specialist Studiofibre was given the job of transforming the space into an HQ fit for any fashionista. Run by husband and wife Ian and Fiona Livingston, Studiofible has had a run of successful office projects for the likes of Big Brother production company Endemol and, more recently, lingerie brand Agent Provocateur. Fiona Livingston designed Net-A-Porter’s Whiteleys office too, but Studiofibre still had to pitch for the project along with everyone else. ‘There were four or five other companies pitching, so it was a difficult one,’ says Fiona Livingston. ‘We had about two weeks to put it together and we were pitching against some large companies, so we were really chuffed to win it.’ The practice’s winning concept built on the success of the Whiteleys scheme, recreating details like the art-deco ceiling moulding, which Massenet had loved, and paring them with sleek, ultra-modern design elements. Studiofibre also proposed a mezzanine level to break up the space. ‘We looked at it from an architectural point of view, which not everybody had done,’ says Livingston. ‘Also, we modelled it all in [3D modelling program] Sketchup, so that we could “walk” Natalie through the space.’ And, walking through the space for real now that it’s finished, it’s easy to see why Massenet was won over. Visitors enter through a pair of oversized black wooden doors, designed and made by Studiofibre, into a runway-shaped reception, decked out in luxurious white leather upholstery and glossy black surfaces. The reception ceiling is a carbon copy of the one at Westfield, right down to the oval skylight and ornate moulding. ‘We wanted the reception to function like a kind of first-class airport lounge,’ says Livingston, who chose white leather sofas by Moma and black glass-topped tables by Established and Sons to give the space a chic-but-comfortable feel. For informal meetings there’s also a custom-made bar in a black, high-gloss finish, pared with American diner-style stools. Touch screens on the bar allow visitors to browse the Net-A-Porter website. Glass-fronted meeting rooms, furnished with simple, elegant chairs by Frezza, line one wall of the reception; all are fully AV-enabled for conference calls with the company’s New York office. The main office space is vast, both in terms of its footprint and its 10m-high ceiling, so the acoustics and lighting were tricky things to get right. ‘It’s funny because usually you go into a space like this and the client wants an exposed ceiling, but in this case they wanted to hide it all, they wanted it to look very classic,’ says Livingston. The solution was a coved ceiling made of Barisol, which hides the internal ceiling works and absorbs echo. To make the space feel less cavernous, Studiofibre has suspended a row of lighting rafts several metres below the ceiling. They contain fluorescent lights with Barisol stretched across them. Morano glass chandeliers hang below some of the rafts, adding another level of depth to the space as well as a touch of old-fashioned glamour. Furniture from the old office has been reused wherever possible, but the bench desks and pedestals by Frezza in the main office space are new. ‘We did try and reuse as much as we could from the old office,’ says Livingston. ‘If it still worked then we used it, but we put out new furniture on the open floor, whereas in the studios and on the mezzanine it’s almost all from the previous office space.’ Studiofibre designed much of the bespoke furniture under its label Supernatural, including the black, high-gloss reception desk and matching bar, and semicircular booths and diner booths, both upholstered in white leather. The designers also created a library area in a quiet alcove of the office with a bespoke black wooden bookshelf and matching ladder. Here the company keeps its extensive collection of fashion magazines. Inspired by Net-A-Porter’s new menswear brand, Mr Porter, Livingston and her team went for a more masculine look in the library area, choosing black, mock-croc upholstered Glamour Boy thrones and Jeeves and Wooster lights, whose shades are a mixture of bowlers and top hats. The entire east-facing wall has floor-to-ceiling windows giving dramatic views across London, but for sunny days there are electronically controlled blinds in a sheer grey fabric, which move up incrementally throughout the day. Livingston’s favourite part of the office is the grand ‘theatre staircase’, which leads up to the mezzanine level. The large steps double as bench seating, on which employees gather to eat lunch or for company presentations. Occasionally, everyone gets together for ‘movie nights’ and Nintendo Wii competitions. Amazingly, considering the company only moved into the new space at Easter, the office is already bursting at the seams, and plans are afoot for a second office at Westfield, also to be designed by Studiofibre. Amazing, but not surprising: as testament to the company’s success, screens dotted around the office show the day’s takings. Every time an item is purchased, a shopping bag icon pops up on a world map to show where the sale was made and how much was spent. It all tells the same story: business is booming.