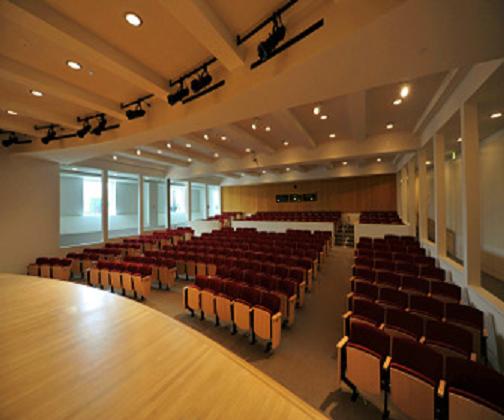 The overhaul scheme has offered acoustical changes to the theatre space, new audio-visual and lighting systems, new roofing, and reupholstered floors and seats. Rich colour pallet graces the floor and walls. Light and sound locks have been added between the performance space and the lobby, as part of the acoustical and theatrical improvements. The renovation has switched locations of the men’s and women’s restrooms allowing for additional stalls to be added to the women’s restroom. The improved box office currently features two windows, with wooden roll up doors, an intercom system, and Internet connectivity for credit card transactions and additional space for storing and serving refreshments. All the carpeting has been replaced and all of the existing chairs have been re-upholstered and re-finished. A new grand drape has been installed along with state-of-the-art production lighting, audio system, AV and dimmers. The heating and air condition system has been improved and acoustical adjustments have been made. The Yuba College theatre has received numerous additions to comply with Americans with Disability Act. They include the addition of two lifts that will allow patrons and performers access to both upstairs and stage level; exterior and interior handrails; a new wheelchair ramp on the east side of the building; barrier free restrooms both in the lobby and in the dressing rooms; tablet arm removal from some theatre seats; additional wheelchair seating; new signage throughout the building, also in Braille; and an assistive listening system with receivers that can be checked out at the box office. The project is one of several campus improvements undertaken by Yuba, including a new athletic field and the Health and Public Safety building. In addition to the numerous plays and performances that the college holds in the theatre, the facility is also available for community use.